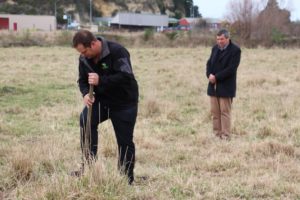 The new purpose built facility will be developed on a five hectare site in Mersey Street, within the Napier City Council’s industrial zone. Over time, it is expected that $5-10m will be invested in the site development.

ContainerCo’s managing director Ken Harris said that the investment both reflects and supports the growth of exports and imports in Hawke’s Bay as well as the continued success of Napier Port in attracting cargo to and from the wider region.

“The new site will future proof our presence in Hawke’s Bay. We have seen significant growth in the need for shipping company and shipper related services in recent years and we expect this to continue,” he said.

The Mersey Street depot will accommodate more than 5,000 TEU (20 foot equivalent container units) and include onsite rail facilities that will reduce the regions reliance on road transport. It will also have specialist facilities suited for the horticultural sector.

The company has signed a long-term lease through to August 2036.

Ken Harris said, “The long term lease secures the land ContainerCo needs to expand its operations in order to be able to handle an expected increase in container movements in the future. It also enables us to replace two of the company’s current Napier facilities, the Battery Road and Austin Street container depots, and consolidate operations at Mersey Street.

“Residents near the Battery Road site will no doubt be particularly pleased by the news of the pending move. We have worked hard to minimise impacts associated with activity in the Ahuriri mixed use zone, and are appreciative that Ahuriri residents have worked closely with us in that regard. However, all would agree that moving operations to the new site in an industrial zone is a preferred outcome.”

ContainerCo is New Zealand’s largest independent container depot operator with depots in Tauranga, Auckland, Napier and Christchurch; adjacent to the country’s four largest container ports. Its customers include some of the world’s largest shipping lines.

The sector is expected to generate further demand for services, with container volumes experiencing compound annual growth of 4.3% over the last 5 years. This growth is projected to accelerate due to the increasing containerisation of New Zealand’s bulk cargo.

Since 2012, 40 foot and 20 foot container volumes entering and leaving New Zealand have grown by 16% and 8%, respectively. The increase in container volumes is putting pressure on port facilities, creating demand for standalone container storage and repair depots.

Ken Harris said, “Demand for off-port container processing and storage has steadily grown and this site is important as it is near port and rail infrastructure, reducing truck movements and exporter and importer costs.

“The cost of container handling needs to be as low as possible to ensure that exporters are competitive and costs are minimised, therefore container parks need to be as close to the port and rail as possible.”

Local engineering firm Strata Group has been appointed to manage the project and a range of local contractors will undertake the work.

Ken Harris said environmental considerations were a high priority. The development has a watercourse running through the site which will be enhanced to support Napier City Council’s wetland restoration programme. It will be fully landscaped and planted.