A family’s longstanding connection with Frimley has been recognised with the naming of a new road to a newly established subdivision.

The McKay family owned a 4-hectare property in Lyndhurst Road, Frimley for over 50 years that is now part of a residential development that will have over 180 new houses when completed.

The entrance off Lyndhurst Road has been named McKay Close and the former owner 92-year-old Marie McKay, who still lives in the Frimley area of Hastings is humbled by the acknowledgment. 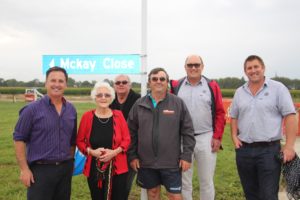 “I don’t like the limelight and this comes as bit of a surprise.

The announcement has helped Mrs McKay recall many fond memories of living on the property with husband Philip and their three children Gordon, Stephen and Philippa, where they grew peas and beans for Watties.

“We bought the land in the early 50s and is was pretty much out in the sticks, we were surrounded by farms and orchards.

The family became well known as growers of evening primrose which they supplied to a health product manufacturer in Christchurch.

“Back then it was most unusual for someone to grow and harvest evening primrose and we would often get people visiting when it was in flower to smell the amazing scent. I also started to use evening primrose oil and I still do to this day.”

The family home, a century old villa, has also had its history recorded by being named after a connecting road in the subdivision. The road has been named Drovers Way as prior to the McKay’s purchasing the land and home in the 1950s it was used by the previous owners, the Williams Family, as the main drovers (stockman) cottage for the farm from the late 1800s.

Greenstone Land Developments director Barry O’Sullivan researched the history of the area for potential street names and came across the McKay family’s links to the area.

“We then approached Mrs McKay and then spoke to her grandchildren, who were delighted that the family name would be recognised.

“The timing was perfect as council had requested road name options and we thought it was appropriate to put forward both the McKay family name as well as something that connects the area to the cottage that was used by the main drovers (stockman) for the Williams family, who were large land owners.

“We’ve been buoyed by the demand for sites with over 60 already sold and we hope to now fast track the next stage of 50 sections.

“We’ve been working hard with council staff and contractors to get services and access underway, so that property owners and their builders can get underway with their homes.

“It’s been a great team effort.”

Construction on the first house within the subdivision has started.