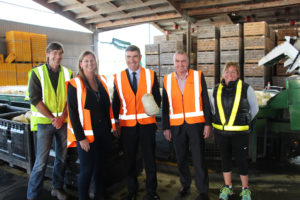 Government Ministers and dignitaries were treated to an organic Hawke’s Bay lunch, served up by the countries largest organic grower, during a visit to the region.

Bostock New Zealand welcomed the Minister of Primary Industries, Nathan Guy, Minister of Economic Development, Stephen Joyce and the Minister of Maori Development Te Ururoa Flavell to its organic kitchen, where subsidised nutritious meals are served up daily for its staff to encourage healthy lifestyles.

During the visit, Bostock New Zealand Human Resources Manager Vikki Garrett spoke to the Ministers about the importance of the Recognised Seasonal Employers (RSE) scheme, which brings overseas workers into New Zealand at peak labour times.

“The RSE scheme is an integral part of industry growth. We are continually growing and we need to ensure we have the staff and labour to continue our growth. It also enables us to create full time jobs for locals.”

“We are all working together in good faith towards a common goal of increasing the availability of skilled local labour to support the increase in growth and productivity and economic growth of the region.”

“Our aim is to provide training and pastoral care to support and lift the skills and capability of locals so they can obtain fulltime, permanent work in Horticulture.”

Bostock New Zealand grows, packs and markets high quality squash, onions, grain and employs up to 600 people in the height of the season.

The demand for organic apples has driven major growth at Bostock New Zealand and helped create more permanent jobs with plans to plant 50,000 more trees each year for the next five years and introduce more organic apple varieties.

During the visit the Government Ministers were given a tour of the squash packhouse, where squash was being packed for local market.