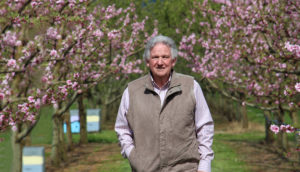 Horticultural pioneer John Paynter, whose lifetime ambition is seeing Hastings Heretaunga Plains planted in fruit trees, is this year’s recipient of the Pipfruit New Zealand Award for Outstanding Contribution to the Pipfruit Industry.

Mr Paynter is the first grower in New Zealand to receive the award since it was established in 2013. He was presented with the award at the Horticultural Conference and Awards dinner held in Nelson last night – home to where his family first started growing apples in 1862.

Accepting the award, Mr Paynter said all he has ever wanted to do is plant fruit trees and he will keep on going.

At 75, Mr Paynter, who has no plans to slow down, said he is as excited today about the industry as he was when he planted his first tree back in 1965.

“No other industry puts more back into the local economy of my region than horticulture – in terms of the thousands of jobs it has created, revenue returns, ongoing investment, along with science, innovation and education opportunities.

“We are entering a great time in horticulture and our future is going to be even brighter as New Zealand leads the international market with premium quality fruit and new varieties.

“I’ve lived the good times and the bad, experienced the highs of record returns and seen growers lose their livelihoods and Mother Nature destroy our crops, but beyond doubt New Zealand is the best place to grow apples and the world knows it.”

Mr Paynter said while he had lived all his life in Hastings to be honoured in Nelson had special personal significance.

“It was in Nelson that our family first started planting apples in 1862, it was Nelson growers, not Hawke’s Bay, who first backed me when I stood for the New Zealand Apple and Pear Marketing Board, and 40 years ago it was in Nelson at this very same venue that we announced a record payout that saved our industry with a miraculous recovery.”

Along with Mr Paynter advising Brierley Investments to invest in horticulture which saw it acquire and plant 700ha which is now part of Mr Apple, his Johnny Appleseed Group has also planted around 700ha.

“John’s vision, leadership and thirst for innovation has made one of the greatest impacts in shaping Hastings’ landscape and the economy of Hawke’s Bay along with the ongoing success of New Zealand’s horticultural industry.

“John has always been at the cutting edge of developing new varieties and marketing strategy and orchard innovation. He was the first grower to individually brand fruit in 1975, introduce wind machines to New Zealand and limestone tracks in orchards.”

He played a critical role in establishing and was chairman of FIPIA (Fruit Industry Plant Improvement Agency) and was the original architect of the global variety development programme for ENZA.

Along with Mr Paynter’s export business Johnny Appleseed Holdings, the company’s Yummy brand leads the New Zealand domestic market and supplies apples and stonefruit through supermarkets and into schools and households across the country.

The company employs over 500 people at the peak of the season and 350 throughout the year.

Mr Paynter was elected as a Director of the New Zealand Apple and Pear Marketing Board in 1976 and served three-year terms until 1985. He stood down for three years and then served a further nine years through to 1997.

He has also served on the Boards Napier Port, NZ Post, Plant and Food Research, New Zealand Kiwifruit Authority, a Kiwifruit Marketing Board and founding chairman of Zespri.

Mr Paynter is the fourth of five generations of his family who been at the centre of the New Zealand pipfruit industry, from the 1860s, starting in Nelson and moving to Hawke’s Bay in the early 1900s.

Today, Mr Paynter and his sons Paul and Jonathan’s business is still based at the original home block in St Georges Rd, Hastings where the packhouse and coolstores along with the international office work out of the homestead where he grew up.

With his business partner Peter Andersen, Mr Paynter launched the Yummy brand in 1973, initially with stonefruit and from the deregulation of the domestic apple market in 1994, the company moved into apples.

A key strategy from the start was to deliver superior eating quality of the same cosmetic standard as export fruit and a greater range of varieties to the consumer.  Yummy was the first to individually label fruit in 1975.

Mr Paynter has always been interested in innovation to improve production and fruit quality. A notable milestone was his introduction of wind machines. Having seen them in working in the United States and he wanted to introduce them to New Zealand. However, the experts at the Department of Scientific and Industrial Research thought otherwise.

He applied for a licence to introduce and trial a machine but was turned down twice.

Mr Paynter could regularly be found during frosts, up the tallest ladder he owned, taking temperature readings.  Convinced wind machines would work and he purchased and imported one from Orchard Rite in 1979 after losing his Granny Smith crop in each of the two previous years.  Practical experience proved the point and now these wind machines are widespread across the region.

Mr Paynter was instrumental FIPIA (Fruit Industry Plant Improvement Agency) under John’s guidance in 1981.  The company was charged with importation, testing and variety management of offshore and onshore material on behalf of all growers. FIPIA also introduced the budwood selection programme, which worked successfully for many years.

FIPIA was ultimately absorbed into ENZATree and they cut the stonefruit components of the programme.  In such a long term venture major changes in strategy or structure can be very disruptive and so it proved to be.

Mr Paynter was also the original architect of the global variety development programme for ENZA, originally with Pacific Rose and then refined with the inception of Jazz.  He’d retired before he saw it come to fruition but he’s certainly pleased to see ENZA pursuing the concept now.  His vision was to facilitate global plantings and year-round supply so as to establish varieties and brands of genuine scale and value – all the while allowing NZ to lead and other suppliers to be complementary.  Even today, this is consistent with Pipfruit NZ’s objectives within Prevar Ltd.