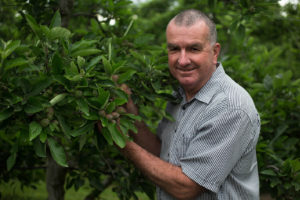 New Zealand is set to grow its largest ever export apple crop of 21.5 million cartons worth a record $800 million, the industry’s leader announced today.

“We are the first of New Zealand’s larger primary sectors to meet the Government’s challenge of doubling exports by 2025, and are well ahead of our own target of becoming a billion dollar industry by 2022.

“New Zealand grows the best and safest apples in the world and we have been ranked No 1 for international competitiveness against all our global market competitors two years running.

“We have built a fully integrated industry that is forging ahead with sustainable growth, innovation, leadership and strategic vision,” he said.

The 2017 season was an ‘on year’ crop, which along with the first of another million new fruit trees coming into production would produce the largest tonnage of fruit ever harvested in New Zealand, Mr Pollard said.

“Spring had produced a great fruit set for excellent thinning, enabling growers to optimise yield by allowing fruit to have space to grow in size, quality and high colour,” he said.

“Our apple industry is having a huge impact in our growing regions. The provinces are prospering with hundreds of millions of dollars injected back into the local economies.

“Our apples have the highest food safety profile of any fruit or vegetable, earning us exclusive market access, we developed our own New Zealand varieties and we have a world class Recognised Seasonal Employer Scheme that supports our Kiwi workforce and guarantees we pick our fruit at optimum quality.

“We are creating hundreds of new permanent and part-time jobs for Kiwis, and injecting millions into the local economies stimulating stronger growth and more business opportunities. For example the Hawke’s Bay’s growth rate has now overtaken Auckland and Wellington.

“The Recognised Seasonal Employer scheme has given growers more certainty of labour to pick the crop at optimum quality, which is a critical to our industry’s success.

“We have developed a mix of proprietary New Zealand varieties that appeal to the new apple consumers particularly in the developing Middle Eastern and Asian markets. Since deregulation these markets have grown from 10 to 50 per cent of the trade.

“New Zealand’s reputation for consistently delivering the most sustainable, safe, high quality, and exclusive apples and pears has created added value which ensures that New Zealand apples have access to the most discerning consumers even in those countries that also grow apples.”