Sharing the love benefits everyone 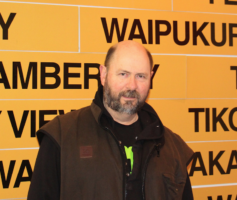 Paul was initially employed by the Napier City Council as economic development projects manager, joining another relative newcomer James Rowe. Paul had spent 25 years working in economic development in various parts of Australasia and was about to become an experiment. He moved to Hawke’s Bay in early 2015.

At the time Paul was speaking at a conference in Australia and he admits that he was a little surprised by the move, which came as the community was about to vote on the amalgamation of the region’s five councils.

“It did come as a bit of a surprise to me, but this announcement has turned out to be pretty good, 21st century thinking about regional development. It turns out to be about much more than sitting in Napier part of the week and in Waipawa for the other part.

“This experiment is proving to be a revelation and possibly the most rewarding thing I have ever done. Much more to the point, I believe the shared service arrangement has real – and perhaps unforeseen – benefits for the two councils and for the Bay more generally,” he says.

Paul believes the benefits are especially important for CHB, a part of the region that is less diverse economically and that perhaps feels left out, maybe even forgotten, by Hastings and Napier.

He says economic development means many things; it means different things to different people. Its methods and areas of focus vary and it is understood a little by a lot of people, but only deeply understood by fewer. Its outcomes are often felt only long after actions are taken. It is both art and science.

“Things don’t always pay off and efforts can go unrewarded. The drivers of economic development are complex, there are many interacting variables. Expectations can be high, ridiculously so.

“A mayor (not from these parts) recently said that a new economic development agency (EDA) would turn the region concerned into an ‘economic powerhouse’. This is nonsense, putting it politely. Economic development is about patient investment.

Paul attempts to simplify economic development as “linking and leveraging”.

“It’s about knowing one’s patch, making connections, having conversations, discerning opportunities, sharing information in an open source way, building coalitions between the willing – aka networks, thinking outside the box, lifting collaboration from low level to high level – these activities are core business in economic development.”

Paul says the shared service model he’s at the heart of allows CHB and Napier to become part of a broader regional exercise in linking and leveraging. It allows the councils to participate in conversations that it simply would not be party to, absent the arrangement.

“And by this, I don’t mean simply CHB having a voice in Napier and Hastings.”

“Having two practitioners working separately in two different councils, no matter how well they get on or know one another, is not the same as a shared service model.”

Paul points to two developments that have enhanced the model.

“They include the work I have been engaged in with the regional economic development strategy (REDS) and involvement with other region-wide activities, and secondly the opportunities provided by the opening of the Hawke’s Bay Business Hub in Ahuriri.”

REDS was due to be released July and is likely to be put into action later this year. For it to be adopted it needs support by all five councils.

Paul says REDS is ambitious in at least four ways – it is a genuinely whole-of-region strategy; it is an engaged (bottom up) strategy; it has been co-created with Maori

for individual councils – access to knowledge and learning, interacting with all kinds of businesses, one-on-one and in workshops, access to Maori economic development thinking, linkages with central government and with ministers, and conversations with other regions on issues like delivery models for regional economic development.

“The Business Hub also provides huge potential and opportunities for both collaboration and learning. Co-location doesn’t always mean collaboration. And many good collaborations occur outside the walls of the Hub. But rubbing shoulders on a regular basis and sharing information with other councils, with Business Hawke’s Bay, with the Chamber of Commerce and with local representatives of government economic agencies is gold for an ED practitioner. Linking and leveraging 101!”

This is all very well, you might say, but at the same time many of you will be either sceptical or want to see some evidence that it is working.

Paul says there is a range of activity underway.

• The formation of a regional network of downtown marketing associations that will collaborate and learn from one another and in particular promote ideas flow, especially to CHB;

• Getting REDS firmly focused on CHB opportunities, for example in relation to

the idea of “pop up incubation” and a

flying squad of experts that would bring Business Hub expertise to CHB and Wairoa;

• Leveraging the forthcoming Angel Investor Summit, to be held in Havelock North in November for different parts of the region and for getting Iwi and Post Settlement Groups involved, including in CHB;

• Getting regional business buy-in to the 2017 National Business and Professional Women’s conference to be held at Oruawharo;

• Pulling both Napier’s and CHB’s emerging start-ups into further opportunities for incubation and growth by linking up with start-ups players in other parts of our region, and with other regions – for example, conversations with SODA Inc in Hamilton and Enterprise Angels and Venture Business in Tauranga will bring outside expertise and knowledge to CHB;

• Conversations with EIT about better internship flows in Napier will open up new opportunities in CHB;

• Leveraging off new EIT research on emerging economic development opportunities that has the potential to benefit all parts of the region; and

• Ensuring that the soon-to-be-established University of Waikato research centre in Napier becomes a truly regional resource, by linking developing projects that will benefit CHB.

“These are but a small selection of current and potential opportunities.  These outcomes, themselves only opportunities for further and bigger outcomes, all come from the SSED, only from the SSED, and from the capacity for one person working across different parts of the region to be part of conversations and initiatives that would not otherwise even have been known about.”

“Being a SSED means working on the road, being highly mobile.  Often I am working on CHB matters sitting in Ahuriri or having meetings in Hastings or meeting key players in Waipukurau.  I’m not often in the council building in Waipawa, or indeed in Napier.

“The SSED also means listening, joining lots of dots.  It means being able to fit two hats on your head at the same time, to simultaneously think along twin tracks.  Above all, I cannot help telling myself things about opportunities in either one place or the other!”

“I believe it will catch on, especially where councils are experiencing budgetary pressures and are constrained by increased expectations and limited capacity to deliver.”