Havelock North Set for the First “Ultimate Week in the Village” 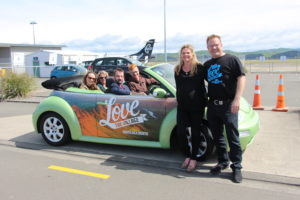 The Havelock North Business Association is excited to be hosting the winners of its first “Ultimate Week in the Village.”

Over 50 Havelock North Businesses have generously sponsored the $12,000 promotion, which showcases the best of Havelock North, from hospitality, shopping, activities, wine tours, and health and beauty.

HNBA President Milton Naylor says he has been overwhelmed by the generosity of local businesses who were all keen to get behind the promotion, which was born out of last year’s water crisis.

“A small part of the promotional fund that was allocated by the government was used for a social media campaign to promote Havelock North businesses. We thought it would be awesome to create a competition which showcased the best of Havelock North.

“Businesses jumped on board for the Ultimate Week and we put together an amazing package, which attracted thousands from all over the country through our Love Havelock North Facebook Page.”

The winners of the “Ultimate Week” are two couples from Wellington Erin and Matthew Judge and Kristie Marsh and Ben Bakker.

Erin and Matthew got married at Craggy Range over 10 years ago and are very excited to return with their best friends to enjoy Havelock North.

“It’s such an amazing prize to win. Havelock North holds a very special place in our hearts so we are really looking forward to a week of hospitality and entertainment.”

The couple were welcomed at the airport by Mr Naylor and HNBA Executive Committee Member Catherine Wedd who handed over the keys to the new Havelock North “Love Beetle”, which they will drive around throughout the week.

“It’s been amazing to see the Havelock North community come together to promote the Village. The couples have an action-packed week planned full of fun and adventure,” said Ms Wedd.

“They will enjoy eating out at Havelock North’s best restaurants and cafes, go to a show at the Harcourt’s Hawke’s Bay Art Festival, head out to Cape Kidnappers to see the gannets and enjoy a three-course lunch. Then a spot of shopping, a winery tour with Yvonne Lorkin, a Mangagpapa High Tea, there’s pilates, massage and beauty therapy on the itinerary and they will stay at Black Barn, Porters Boutique Hotel and Harvest Lodge.”

One of the conditions of the competition was an agreement to be filmed and photographed throughout the week.

“One of the objectives of this promotion was to take Havelock North out of Hawke’s Bay and attract more visitors to the Village. We want to use the ultimate week as a visual showcase of all Havelock North’s amazing attractions, so the winners of the competition needed to be comfortable with the cameras being around.” said Ms Wedd.

Following the gastro outbreak, the Government allocated a $100,000 promotional fund to the Hastings District Council, which was to be distributed through the HNBA.

“In order to get the money, we needed to show a promotional plan, with a budget that was transparent and showed a proper accountable process. This took some time, but, we are excited to be rolling out these initiatives now that the weather has warmed up and we are heading into summer,” said My Naylor.

The majority of the promotional fund is being used for a unique Havelock North event which is currently being planned. It has also been used for branded Love Havelock North merchandise, professional video and photos and the purchase and promotion of the “Love the Village” VW Love Beetle.